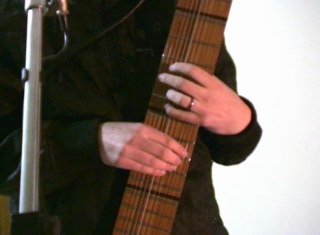 Playing Billie Jean on the Stick

This video was recorded some time in December 2009. I had just learned how to tap with both hands on the Chapman Stick when I was contacted by representatives of the Chinese video portal Youku.com. They asked me to provide them with a quick video of myself showing off the peculiar instrument I told them I had just learned to play.

Later the video was to be tacked on to footage that was recorded some days earlier with the Youku team. All together this was supposed to be my entry for the voting to join the show 全家都来赛 (the official English name is the silly “Super Family”).

As the show’s purpose is to present ‘talented families’, I asked Jackie to play the drums while I would cover bass, chords and vocals of Michael Jackson’s Billie Jean. The result can be seen here.