The Chapman Stick is a stringed instrument invented quite some time ago by Emmett Chapman. It is a blank slate equipped with a grid-like touchboard, two groups of stings and a powerful pickup allowing the player to tap notes rather than requiring fretting and strumming. 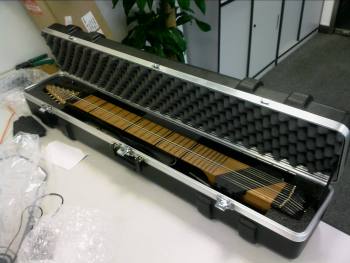 Grand Stick after arrival in Shanghai

I usually describe the Stick as being a guitar and a bass unified on one fretboard, though I think that it is much more than that. It rather combines the advantages of a piano over a traditionally stringed instument—such as tonal range—with the advantages of the fretted instruments, i.e. direct fine control over the sound through plain fingers on strings. More than that, it even expands on these concepts and brings a number of improvements and innovations.

Check out the official website to read more about what sets apart the Stick from other tapping instruments.

There’s a documentary about Emmett and the Stick story in the make. You can see the trailer here.

I’ve received my first Stick—a 12-stringed Grand—in July 2009 and have just placed my order for an Alto Stick made from Indonesian Rosewood.