Connectors on the Wavedrum’s circuit board

On the circuit board of the Wavedrum there are solder holes to accomodate three large connectors. Since they are so easily accessible and thus very inviting to anyone interested in modifying the instrument, I decided to trace each of the pins to its destination.

The three connectors are named CN10, CN11, and CN12, respectively. CN10 is found on the bottom right, CN11 on the bottom left, and CN12 close to the left edge below the micro SD card reader.

Most of the ten pins of CN10 are outputs. The first three pins carry clock signals used by the analogue to digital and digital to analogue converters on the top-side of the board. Pin four gives access to the PDN (power down) signal which is used to disable the converters. The next three pins are connected over the resistors R85, R84, and R83 to the DSP's pins 145, 144, and 143 (respectively); according to the DSP's datasheet these pins are DAI_P8 (SFSI), DAI_P10 (SD2B), and DAI_P11 (SD3A), and are thus part of the Digital Audio Interface (DAI). The remaining three pins on CN10 expose the supply voltage, ground, and an alternative positive voltage (the same as on the plus pole of the silver capacitors near the right edge of the board). These are the signals left to right:

What is this all good for? Well, since all these clocks and voltages are exported it becomes relatively easy to connect an external digital to analogue converter (when DAI_P8, DAI_P10, and DAI_P11 are used as outputs), or an external analogue to digital converter (if the DSP pins are used as inputs instead). nAs there are protective resistors between the DSP pins and the connector pins 5–7 I assume that they are supposed to be used as inputs.

Moving on to the left bottom edge of the board we see a 14-pin connector with the name CN11. This connector gives access to the JTAG interface on the DSP, which allows system debugging. Unfortunately, I don't own a JTAG dongle and the free JTAG debugger OpenOCD does not support the SHARC core, so I haven't been able to experiment with the debugging interface. I'm not sure whether it is possible to use debugging feature without hardware/software provided by Analog Devices. Using JTAG it should be possible to overwrite the flash memory and replace the firmware. This is the most promising method to upgrade (or downgrade) a Wavedrum.

The pins on the bottom row are all connected to ground, so the following table only lists the signal names of the upper row of the connector in order from left to right:

CN12 exposes the DSP's two-wire interface, a serial interface compatible with the proprietary I^2C interface. This allows us to connect a number of external serial devices to the serial bus. As firmware support is required to communicate with the devices on the serial bus I don't see how this could be used without a custom firmware.

The following table lists the signals from top to bottom:

What led me to tracing the routes of the connectors was my curiosity about the boot mode. According to the DSP's datasheet, there are four possible boot modes to select from by playing with the states of the pins BOOT_CFG1-0 (one of these boot modes is “no boot”). Tracing these two pins from the DSP it becomes clear that the third boot mode “EPROM/FLASH boot” is hardwired (BOOT_CFG1-0 = 10). The other two usable boot modes are SPI master and slave boots. 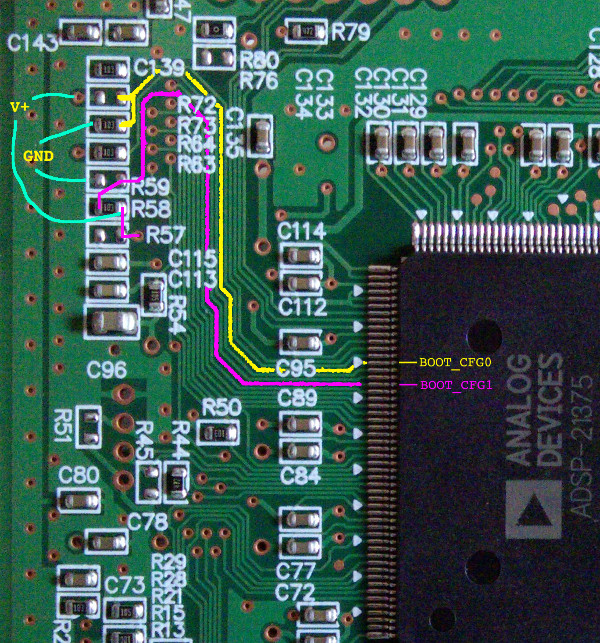 As can be seen on the photo, the Wavedrum engineers were kind enough to leave solder pads connected to boot configuration pins on the board, allowing us to rewire them as we see fit. To set BOOT_CFG0 the pads for R72 have to be bridged; likewise, to clear BOOT_CFG1 only the two pads of R59 have to be bridged.