This is Chlodwig, the marvelous elephly. The elephly is a creature half elephant, half fly, a quarter duck and three quarters weirdness—amounting to 200% of pure awesomeness! 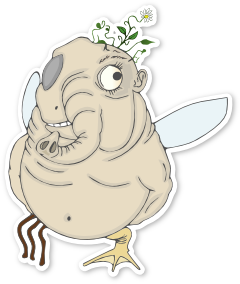 Chlodwig came into existence when Rekado felt bored during a class of Electrical Engineering. When Rekado realised the wonder that his creation was, he decided to manually trace the outline of the faint sketch in Inkscape and colorise it. This process took quite some time, because it often required Rekado to remove strokes and blur out details in order to reduce the drawing to the most essential, but on the 21st of March 2009 it was done.

Get your very own scalable drawing of the elephly by touching the elephly’s belly!

The Elephly by Ricardo Wurmus is licensed under a Creative Commons Attribution-ShareAlike 3.0 Unported License