After I had ordered one Flat 5 kit from Blue Planet Acoustic I waited. And waited. And waited. But nothing happened. Aside from the initial order confirmation I had not received any other email. I wrote them an email, to which I received no reply after several days. Worried that my order was forgotten (and the advance payment lost) I decided to call them. When I finally got through I was surprised to be talking to a friendly person who informed me that my order was not processed because I had only ordered one kit, but to build a set of two speakers I would need two kits.

Since the description on the order page isn't at all specific about the contents of the package, I assumed that I would get two matching drivers (approximately EUR 65 each), a bit of cheap damping material, and simple speaker terminals. Turns out I was wrong and this variant of the Flat 5 design comes with a filter circuit, which inflates costs quite a bit due to the use of "audiophile" grade electric components. In my opinion, "audiophile" is a meaningless attribute. I'm sure one can get an accurate inductor, capacitor, and a low-noise power resistor for less than what they charged me.

I didn't want to cancel my order and the costs for an extra kit was within my budget, so I decided to order a second one. I noted in my second order that this is meant to be an amendment to my previous order, and that I'd like them to drop the extra delivery fees. They ignored my message and sent me the components. I paid delivery twice. I probably won't be ordering from Blue Planet Acoustic again.

The package came with the components and two A4 sheets of "instructions". One sheet was the schematic of the filter circuit; the other sheet was a front and side drawing of the speaker cabinets. The drawing does not include any recommendations for placing the filter components, nor does it suggest the order of assembly.

This was my very first build of a speaker cabinet. I wanted to reduce the likelihood of failure due to my lack of experience, so I decided to order pre-cut MDF boards from speakercase.de. I don't own a router nor do I have any power tools other than a powered drill and a jigsaw, so cutting MDF boards and recessing the rim of the drivers would have been very messy and very frustrating.

When the MDF boards finally arrived after about three weeks (they are made to order) I was pleasantly surprised to see how easy it was to put them together with Lamello wooden biscuits. It looked all so very easy, so I didn't pay enough attention when gluing things up, only to find out much later when attempting to put on the front that the order of assembly matters a lot. There was no way to put on the front after the transmission line barriers had been glued to the back and the bottom and right side board had been fixed. The presence of the barriers and the fact that the front and back board both have matching dados to hold the barriers meant that the front could only be lowered straight onto the barriers. So I had to saw off the Lamellos that I had already glued into the side and bottom boards...

Another surprise was how very tight the fit of the internal barrier boards and their slots in the front and back were. Even though I used a precise square to make sure that the boards were glued perpendicular to the back I still had to remove quite a bit of material to ensure a flush fit of the front. The result is far from perfect, but I'm sure that it won't be noticeable once I sand down the cabinets to apply a black wax finish. 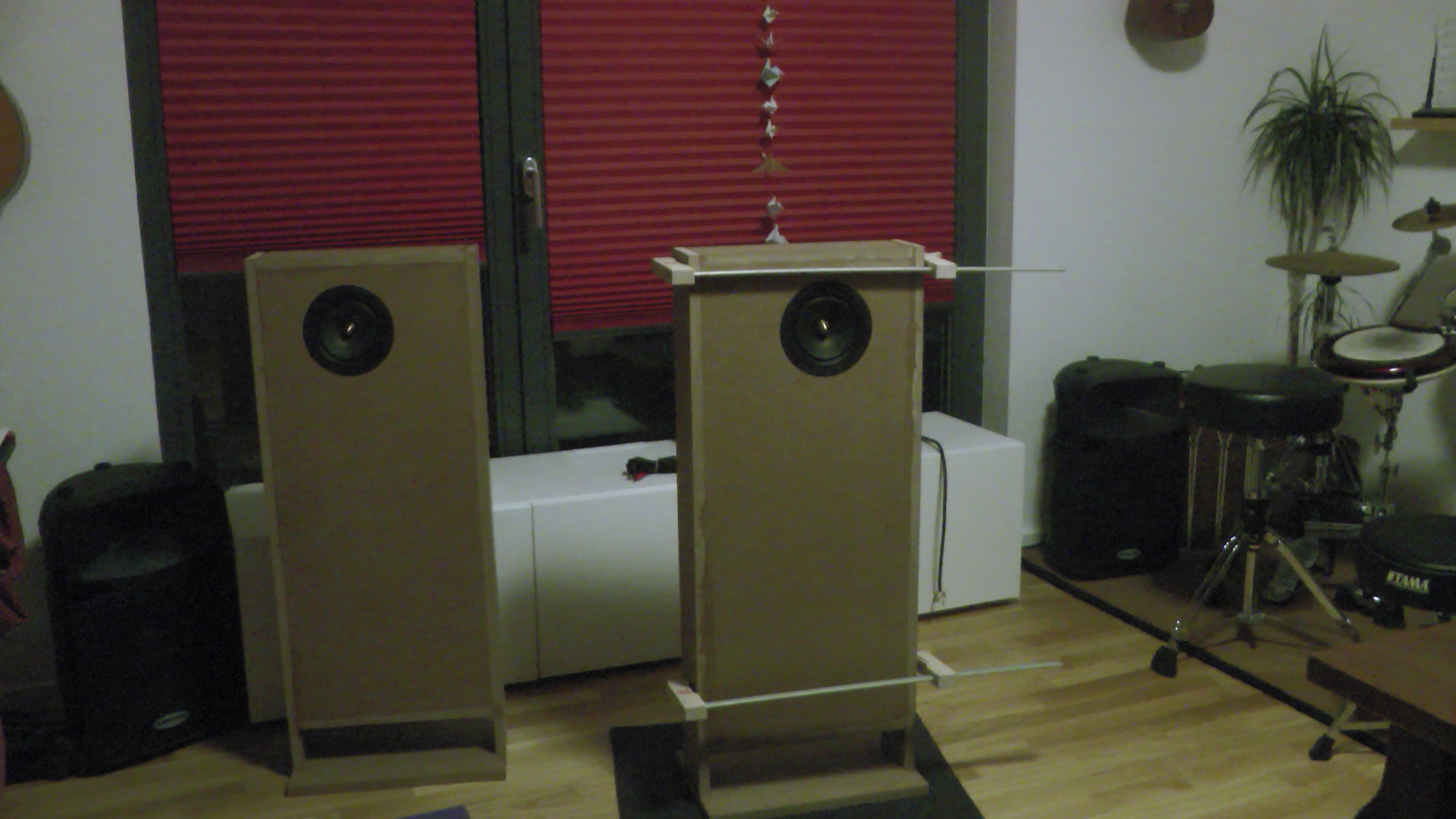 It was especially annoying to me that the assembly order suggested in the 2013/5 (August/September) issue of the Klang & Ton magazine does not apply to a build with Lamellos. It's obvious in hindsight, but I still feel like there must be a better way to put the MDF boards together without leaving off four Lamellos for the front.

The kit from Blue Planet Acoustic included two sets of components for an RCL filter to attenuate an annoying frequency bump in the response of the broad-band driver. The inductor was surprisingly large and heavy, so it took me a while to decide on a mounting place inside the cabinet; I eventually decided to glue the three dead-bug-soldered components to one of the transmission line barriers. 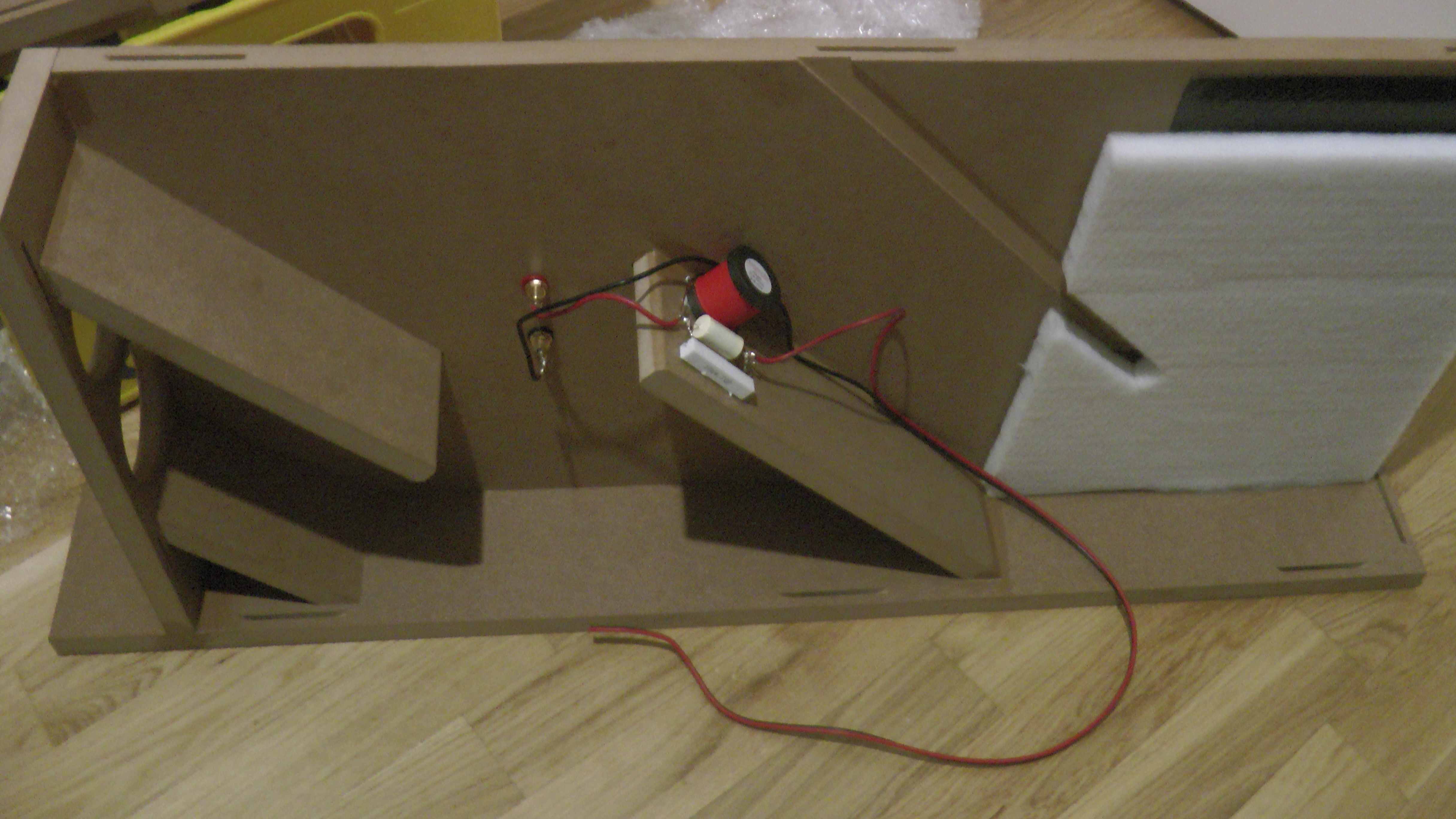 The only difficulty was to solder the speaker wires to the banana panel jackets, which are excellent heat sinks. It took a long time to heat them up enough for an acceptable solder joint.

Do they sound good?

I connected the two speaker cabinets to a Yamaha A-S701 amplifier, though any decent amplifier would work just as well. Jazz recordings such as the delightful Mikarimba! now have a surprising amount of clarity; the bass is tight and clear, there is no "boom", brush strokes evoke a visual response, cymbal strikes have crisp attack and are never harsh; double bass has just the right amount of snarl and body. Other jazz records, no matter the era, simply sound great through these speakers.

Chapman Stick recordings such as Dream Recall by Andy Salvanos sound delicate and fresh. Listening to the influential Friday Night in San Francisco is an experience from which I could only escape with enormous effort.

These speakers sound great at higher volumes. They don't sound noisy. I don't have the urge to lower the volume and I have yet to experience ear fatigue from listening to music with this setup.

The first disappointment, however, came with the Dream Theater + Bruce Dickinson cover of Perfect Strangers. It could be the fault of my copy, but I had to turn it off just a minute into the song. The mix just felt too compressed, but I also think that the upper mids of the heavily distorted guitars and the compression in the higher frequencies (especially on cymbal hits) just became much more noticeable with these speakers. I didn't mind the problems of this copy as much with my old Teufel soundbar (which was okay for the most part, but made everything sound kinda washed out and blurry, especially recordings of jazz ensembles). I'll try to get a better copy and try again.

Piano recordings (e.g. Chopin or Bach) sound good, but honestly I never find them truly exciting. I can now hear the sound of the pedals and keys bottoming out, which definitely adds to the experience. I wouldn't say that it sounds as if a piano was right in front of me, but perhaps this is because I don't really have memories to compare with.

Despite the initial disappointment in ordering parts, this was a lot of fun. It didn't take me too long to put everything together, and the result is a vastly improved aural experience for music that benefits from finer resolution. I'm happy I built these speakers.