One Night In Beijing

When I noticed that the online voting system for the big Niuren 2010 event was not to be trusted, I was pretty convinced not be one of those chosen to perform on stage in Bejing. In order to be sure, I wrote a message to my friend at Youku. Some hours later I was informed that disregarding the number of the votes (which did turn out to be comparatively high in the end) I was supposed to be invited to give a performance on the Stick. After all formal issues were agreed upon, I prepared to leave for Beijing on Sunday morning with the Chapman Stick in tow.

When I arrived at the venue I was surprised to find the stage to be a lot larger than I anticipated. 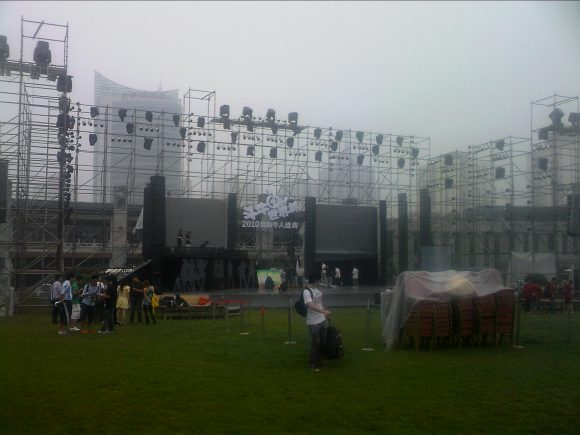 When it was time for my soundcheck the clouds had formed a dark opaque blanket across the unattractive skies of Beijing and at times rain drops mixed with the soil on the vast meadow to form squishy mud. The crew seemed to marvel at the impression of hearing two instruments’ sounds, each articulated by one individual hand on its own set of strings but on one instrument.

At about ten o’clock in the evening, the show began. It only lasted for about 15 minutes as the occasional rain proceeded to grow into drowning vertical streams of water. The stage was lacking any sort of rain protection and it didn’t take long until the stage lights went off as the cables were drenched.

The show was eventually cancelled which only made sense considering that most of the mud-dwellers in front of the stage had given up their hopes for better weather and had left the premises in shoals.

Disappointed we returned to the hotel. When finally everybody had returned we discussed with the organizers how to proceed, how to salvage the investment. At first the idea was going around to stage the event on Monday evening, without an audience, just recording and pretending it all happened the day before. This idea was soon discarded, though, when the organizers learned that most of had would be flying back home on Monday morning. A compromise was found when the decision was made to record individual performances—or rather very pale and primitive versions of what was originally planned—in the lobby of the hotel. 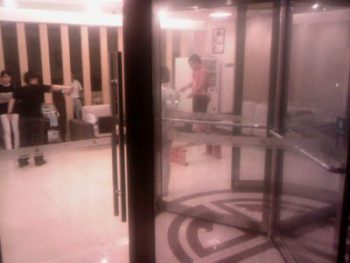 Recording video clips in the hotel lobby at 2am

These clips—all of which were recorded between two and three a.m.—are supposed to serve as teasers for the actual show which has now been postponed to some time in August or September. I will add the links to those video clips in the next few days, provided I can find them. A new entry will be posted once the date for the postponed show in Beijing has been confirmed.

Update (July 29): The short video clip has been uploaded. You can watch it on youku.

Update: Gao Ming interviewed the participants during the preparations of the show. There is a 25+ minutes video clip on youku. At about 2:40 he comes across the table where I am relaxing with other participants.