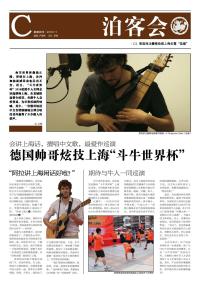 small view of the article

A few weeks ago I accepted the offer to perform a song at this year’s Niuren Competition. As I was notified just two days before the event, I couldn’t make arrangements for taking the Stick, so I just played a well-known song on the guitar. After the performance, I chatted with a woman on site who had an awful lot of questions for me. Turns out she is a reporter for the local newspaper “Overseas Chinese News”. Later the journalist asked me to send her some photos of myself playing an instrument to illustrate an article they were preparing.

The article is now available online, both as a newspaper-styled image and a text version. I am very happy that they chose the photo of me playing the Chapman Stick at home. Thanks to Sandra Yan for the article! (Careful: the newspaper’s website seems to be optimized for the Internet Explorer.)