The Stick—Live on Chinese TV

Once upon a time, there was a mediocre musician with a dream. The story has not yet ended, so I cannot say much more than that. If this story would, however, be written down by my sentimental alter ego one day (long after the last polar bear will have surrendered before the army of blind manatees, oh, the huge manatee!), it would probably make mention of the following event. 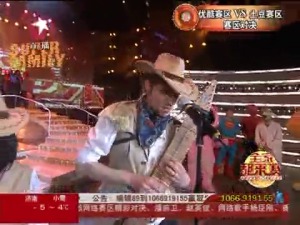 Tossed around on the waves of his whimsical nature, the mediocre musican fell into the path of an opportunity. In a way as to apologize for the accidental collision, the clumsy musician offered to make up for the damage by playing tunes and singing songs for pure entertainment. Not without a hidden agenda was it that on that day the musician decided to bring an instrument, playing which he was not even capable of.

Lo and behold: ’twas the Chapman Stick the musician had strapped on, knowing well that the juxtaposition of the minimalistic yet noble instrument with the silly cowboy dress... What can I say? There is no way I could justify that preposterous appearance.

Anyway, I participated in a popular Shanghainese show and played the Stick. The show was broadcast live on February 8, 2010 and despite the promise to be given a reel of the performance, it took four months and lots of effort on my part to find this low-fi snippet of the very first appearance of the Stick on Chinese TV.

What you can see here is part of my introduction, a teaser of sorts, to keep the audience hooked till the actual performance later in the show. The song I was playing is a somewhat funkier adaption of Wang Li Hong’s “龙的传人”.